Wow, I can’t believe that a few weeks ago, it was Wow’s 4th anniversary ! I remember my first steps as a young tauren in the world of Azeroth :). And my first scary trip to crossroads ! I had a great time those first few months in wow, everything was new and exciting ;).

Also thanks to Edge, Vixx and Banish, whereever you guys are at the moment, with whom I had a great time and all those from Starblade back then.

At the moment, I am just doing a few dailies every now and then and an (heroic) instance. Haven’t played that much lately, the ‘newness’ of WOTLK is starting to wear off… I still have a lock and a deathknight to level, but to go through either outlands or northrend again at this moment, isn’t very appealing. I will wait a while ’till it isn’t so fresh anymore ! 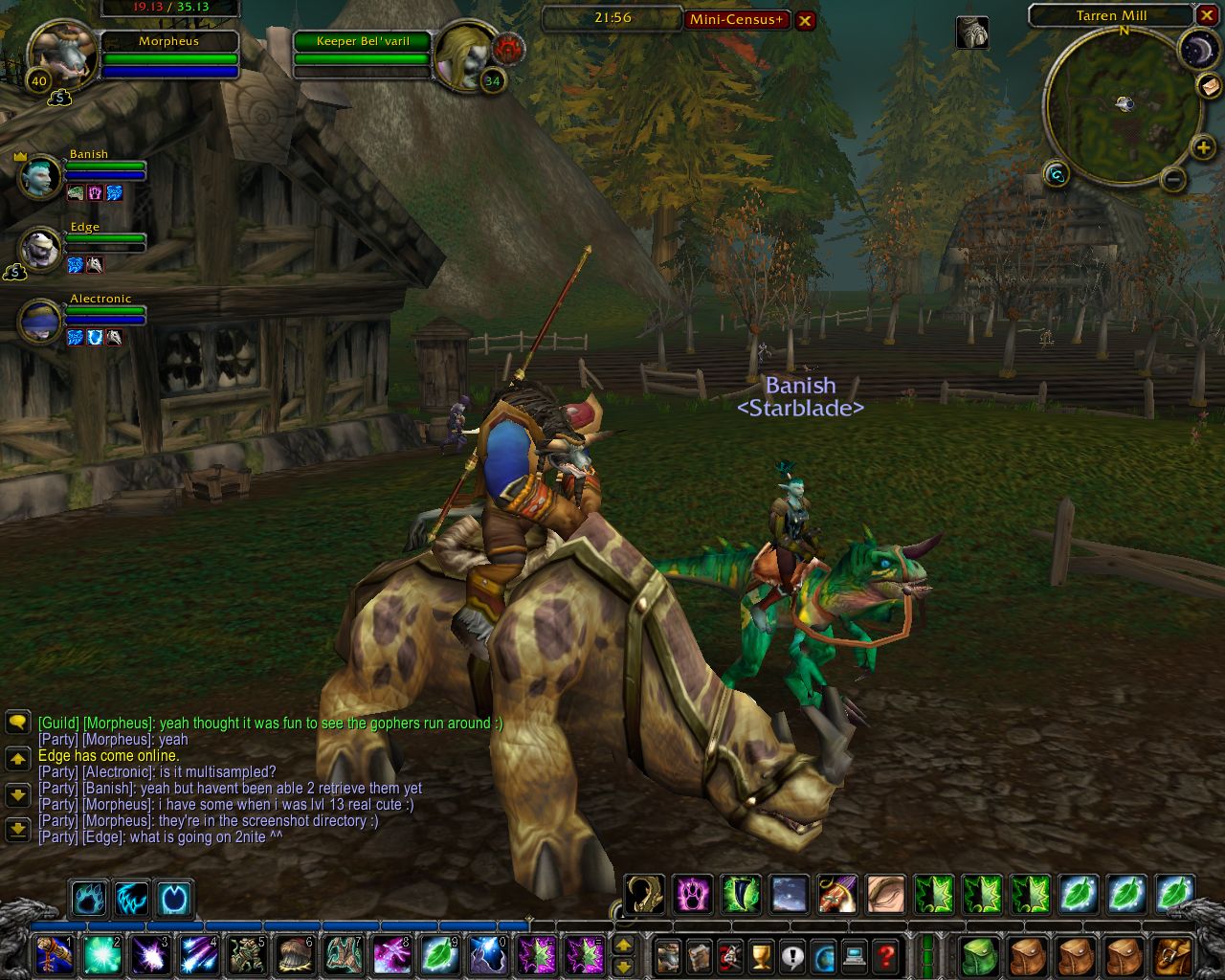 After a mere 2 1/2 weeks after launch Morpheus, the balance druid, got 80 in Icecrown. That sure is a lot faster than 60-70 when BC came out. Think back then I burnt out in Mountain’s edge, only to return six months later to complete the quest for lvl 70.

Questing sure got a lot better in WOTLK as you have read from various other sources. Every now and then you get a quest that uses the new vehicle game mechanic and you get to control a giant or a flying machine. Or shoot arrows from a flying machine ;).

I am now a few days at 80 and I feel a little lost. I do a few dailies, might do an instance with the guild and that’s about it. Already quested so much the past weeks, that I don’t really feel like doing that. The pvp doesn’t seem to be going a lot, a few matches of Strand of the Ancients is fun, but not for a whole evening. I might try Arena again once the next season starts, but I am not really looking forward to this. Most pvp gear will require some sort of ranking though, which I find a bit silly, but I might try it. Last time it got a bit frustrating every time we got over 1500.

Morphea my hunter is almost 72, and the questing is still fun, but the surprise element is a little gone now. I haven’t done any quests in zul’drak, so I’ll make sure to hit that zone with her. I changed her spec from Master Marksman to Beastmaster, which made leveling a lot easier. As mm your pet can hardly hold aggro and you spend a lot of time meleeing. Which isn’t the best thing to do. The cat turned out to be the best pet for this. My scorp will be at rest for a while.

Wrath of the Lich King sure didn’t disappoint. When it was first announced, I was a bit sceptical as it didn’t seem to bring much new and the first screenshots looked a bit bland. But now that I have been playing it since it came out, I must say Blizzard really outdone themselves.

The graphics are crisp, the wildlife on the tundras is alive and the quests are fun and very well setup. Just about each place has a main questline that gives a nice reward and the story is usually enjoyable.

I could go on but images say more than words ! Besides I need to get back in the game…

Wrath of the Lich King 10 Minutes Trailer from Boubouille on Vimeo.

Not all that impressive to be honest. A lot of reused textures and models. Also I think the graphical engine is starting to look it’s age. It’s 4 – 5 years old by now and it’s showing.

Why is it taking two years to release this expansion ? It’s way too long as the current content is getting long in the tooth. The 2.4 patch was nice for a month or so, but does Blizz expect people to be running dailies till late this year ? Ofcourse an instance run with the guild every now and then is fun, but that’s about it at the moment…