On Saturday we had a very nice guild run in the Blood Furnace. No deaths or wipes or quarrel over Loot ! Certainly beats pugs :).

Besides Beano who was lvl 61 we were a little higher than the instance is rated, but we had the quest from Thrallmar to do there anyway, which gave me a new cape, a very nice reward. Some nice loot dropped (a mace for our pally, and some cloth piece from the last boss, nothing for me this time). I did get nice xp though, almost 1000 per mob, as I was rested again. Dinged to lvl 65 at the same moment my ravager leveled to 64. The odds of that ever happening again are very small ! 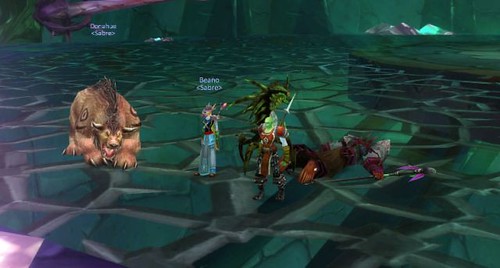 Not the best victory shot here as two of us had already stoned back to Shatt :).